Did you recently update your iPhone to iOS 13?

The testing confirms that iOS 13 platforms are compatible with ReSound MFi hearing aids. However, there are some iPhone and iOS related issues which may impact patients. Download the ReSound Tech Tip to troubleshoot your iPhone if you are experiencing these defects.

To pair your hearing aids to back to your iPhone go to Apple’s support page.

If you’re still having trouble with your iPhone Call us today (541) 754-1377 and we will schedule an appointment to further troubleshoot your iPhone and hearing aids.

Seven years ago, Dr. Frank Lin of Johns Hopkins Medical University reported that hearing loss was highly associated with dementia and accelerated brain shrinkage.  At that time, our medical knowledge on this topic took a giant step forward.

Since that report, our understanding of this relationship has been more evolutionary.  For example, Drs. Glick and Sharma showed that untreated and poorly treated hearing loss results in a scrambling of brain resources.

On a positive note, Glick and Sharma showed that properly fit hearing aids may reset the brain so that the auditory area is once again used for listening. Now the frontal and prefrontal brain areas can resume their normal functions.

More recently, it was discovered that hearing loss upsets the normal rhythmic pulses and interconnections the brain uses to communicate among its different functional areas.

Within the last few months, two separate reports out of Boston and Northwestern Universities showed reestablishing appropriate pulse rates among these different areas of the brain results in significant memory improvements in older people.

These studies, when considered together, suggest the possibility that properly treated hearing loss with hearing aids, perhaps combined with brain pulse resetting, may combat the devastating effects hearing loss may have on memory.

Currently, several large-scale studies are under way, examining the potential therapeutic benefit of properly fit hearing aids and brain pulse resetting on memory. In the interim, it appears medically prudent to treat hearing loss sooner rather than later, as the average delay between diagnosis of hearing loss and treatment has recently been reported to be nine years. It is no longer appropriate to view hearing loss as an inconvenience that can be ignored.

At our clinic, we are currently reviewing the records of 51 patients who have normal aided scores on the same speech in noise test shown by Glick and Sharma to signal brain resource preservation in hopes of identifying those therapeutic steps that can properly reset the brain.

Those interested in obtaining further information on this topic are invited to the monthly meeting of the Oregon Association for Better Hearing at Corvallis Good Samaritan Hospital, Conference Room B on the second Thursday of every month from 3:30 to 5:00 p.m.

Product testers are fit with the newest hearing aids on the market and asked to wear these hearing aids in their own listening environments. At the end of this testing period they complete our hearing aid report card and discuss those findings at our monthly meetings. The hearing aids that receive top rankings are those that are recommended in our clinic. 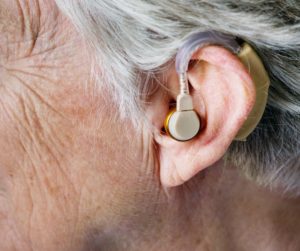 In 1985, Dr. Ron Levitt founded The Oregon Association for Better Hearing, a hearing aid consumer test group. That group was established so that people who are hard of hearing could talk with unbiased, long-time hearing aid users. These hearing aid testers volunteer their time to evaluate hearing aids in an ongoing search to find the best hearing aids in the world marketplace. The hearing aids that receive top rankings are those recommended and fit on patients at Dr. Leavitt’s clinic in Corvallis, Oregon.

Since 1988 this group has educated thousands of potential hearing aid buyers. None of the product testers have any affiliation with any hearing aid sales or manufacturing organizations. None receive hearing aid manufacturer sponsorship or compensation in any form. As such, their hearing aid ratings are unbiased.

This is just what we do and who we are.

Let us know if we can help you or answer any questions you might have about hearing or The Oregon Association for Better Hearing!

Regardless of hearing aid brand or model there are a number of facts that you should know to maintain the hearing aids’ optimum performance.

Watch the video below to hear us discuss 12 must know items for maintaining optimum hearing aid function.

In recent years the focus on hearing health care has shifted from the ears to the brain. One needs to only Google hearing loss and cognition to find dozens of articles in medical and hearing health care journals in the past few years. END_OF_DOCUMENT_TOKEN_TO_BE_REPLACED

A recent publication from Dr. Anu Sharma and colleagues at University Colorado, Boulder showed people who achieve a normal score with their hearing aids on a difficult speech in noise test were spared the brain resource reallocation reported for her subjects who have untreated or poorly treated hearing loss, perhaps explaining the strong relationship between hearing loss and dementia as noted by Dr. Frank Lin and colleagues at Johns Hopkins. END_OF_DOCUMENT_TOKEN_TO_BE_REPLACED

Our presentation from Audiology Now 2016 talking about wireless connectivity in hearing aids.

Many view hearing loss as an inconsequential condition that can be ignored without serious implication. Why else would Medicare deny benefits for hearing loss evaluation and rehabilitation to those over 65? Why would people delay seeking hearing help for years? Scientific evidence no long supports this laissez-faire attitude. END_OF_DOCUMENT_TOKEN_TO_BE_REPLACED